The Market Zone is the place where you will find all of the charity stalls and the little booths selling this and that. Cushions, t-shorts, Turkish delight, sticky face glitter and so on. Before I put the slide show together, I would like to highlight a few stalls that I thought were special. Firstly, there was the very pretty girl selling face glitter.

I asked her how long it would stay on. She told me until the evening but she hatted taking it off as it was stuck on very hard.

Sometimes you regret asking people to smile for the camera! Everybody does but some have to be a bit… well, you know – grin.  These were definitely into the spirit of the day!

At the entrance to the Waterfront, at Stoke Bridge, there was a very impressive balloon sculpture – that is the only word for it. 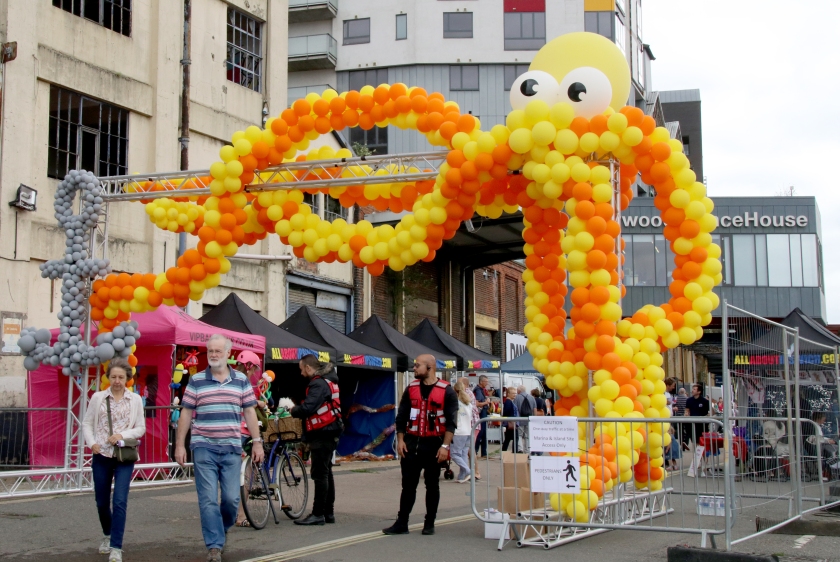 The pinkish stand behind is that of VIP Balloons, a Suffolk based balloon company. He was busy making creatures out of balloons – more in a minute – but he told me that he had made the sculpture. Nearly 1,000 balloons went into its making. He was a bit worried that it might be damaged overnight but, evidently, there was a security guard posted there all night. Good job, too! When I got to his stand, he was busy making an animal for a young lad so I got the video going.

Again, there was so much going on that I have to make a slide show to get everything in.

On the way back, I picked up on some of the things that I had missed earlier in the day. Evidentaly, the skeleton was a “guess the names of the Bones” competition!